Skip to content
Get In Touch
[email protected]
“Signed Card In Glass By Jasper Blakeley” has been added to your cart. View cart
Back 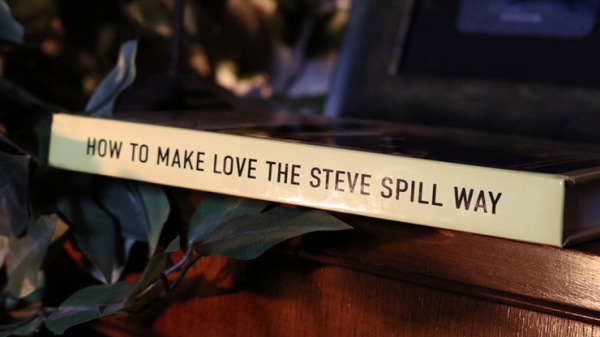 In most magic books, it works out fine when every so often…

In most magic books, it works out fine when every so often there’s an inventive new routine. This book is different.

FIRST, every idea that ever came to Steve Spill’s mind during his 50 YEARS in comedy magic isn’t here just because it seemed in some way original. The routines in this book are ALL KILLERS, NO FILLERS.

SECOND, included in every routine is every word, joke, action, and gesture of his presentation. True, not every word, joke, action, and gesture will fit you like a glove, or fit every circumstance where you might perform. But how to make the routines in this book, or any book, truly yours, is revealed here in clear detail… That’s the focus of this text. This book is not a catalogue of knuckle-busters – it’s about making your magic you, adding comedy, and how to develop your own original material.

Ten of the routines have never been published in any form ever before. There are two that have. The first is SHARP POINTY THINGS. Over the last decade, this effect has been a best-selling fifty-dollar single trick DVD, Confessions of a Needle Swallower. Added details about the routine are presented here for the first time. The second, CITRIC ACID, is Spill’s classic routine for the LEMON TRICK, and was published a million years ago on a Doc Eason video. That presentation was only somewhat accurate, without essential elements that aid in the ease of handling or any of the pertinent thinking or logic behind its construction. NOW everything is exposed here, much of it now obtainable for the very first time.

Here is a brief description of the other routines in the book:

LIKE A VIRGIN: A borrowed Signed Bill to Impossible Location – using a stack of CDs – that was originally developed and performed for Richard Branson and guests at one of his exclusive events.

RED & BLUE: A half/dyed color-changing hank routine about Democrats and Republicans that equally makes fun of both donkeys and elephants during the various phases – ending with the conclusion that both parties are, “Cut from the same cloth.”

MODRERN FAMILY: A Soft Soap type routine – with G-strings, bikini underwear, and tighty-whiteys – that are soiled with lipstick kiss marks and handprints – that’s a surefire recipe for magic that causes a stir in loins and laughter.

LEAF ME ALONE: A Six Card repeat idea done with three leaves and a surprise ending that features a ton of audience participation which culminates in a big-promised-audience-response.

ABRA CADAVERS: A You Do as I Do concept using toe tags and death certificates with a darkly humorous script and a surprise burst of flame at the finish.

DING BELL DIE BOX: This ain’t your grandpa’s Die Box routine – but it does use a half-dozen of the kind of bells you see sitting on hotel check-in desks with a button on top, that you tap and there’s a “ding” sound – that will assuredly keep your grandpa awake.

COPING WITH EDDIE: The only card trick in the book that’s about a boy intimidated by a gently pranking tormentor – which he beats with a Triumph-type-effect.

GO HIMBER FREE: The single most inquired-about routine in the book. Three finger rings are borrowed and linked. The chain of rings is in audience view at all times until it is clear each volunteer that loaned a ring gets a close look. No switches, no stooges, no Himber Ring.

For those who haven’t ordered yet, please be aware this book will improve your sex life dramatically. After only a few pages you will begin to feel intelligent, charming, and clever, then aroused, then funny. And after a few chapters, whatever personal or health problems you are experiencing will immediately vanish.

What Readers are Saying…

“So what we have here is a remarkable guidebook to the professional performance of comedy stage magic, written-from the heart as well as the mind-by a successful veteran working pro who is also one of the most original and creative magicians of his generation. With unusual frankness as well as expertise-and in a distinctively stylistic and comedic voice-you receive professional guidance about character, comedy, creativity, originality, presentation and scriptwriting, and no less than a dozen professional caliber audience-tested routines complete with original presentations, featuring three blockbuster pieces, any one of which could become the feature of your show.
Is that worth $125? I think it’s worth a hell of a lot more, frankly.”

“Some of Steve Spill’s most brilliant routines and funniest stories appear in this book. It is a great read for fans like me and a textbook for comedy magicians who want to learn from the best.”
– Mac King

“There are only a handful of books on magic that contain so many practical and truly commercial routines. A smart performer with a halfway decent personality could probably take just these twelve routines and use them as a basis for a long term and financially successful career in comedy magic.”
– Nick Lewin

“Steve Spill has a real winner with his new book. Just get it and learn from one of the top pros of our time. Steve has great ideas and philosophy, and he is a wonderful storyteller.”
– Jeff McBride

“Due to the fact that I’d like to selfishly keep every spurious subtlety, original technique, radical insight, and deeply thoughtful analysis contained herein for myself, I refuse to endorse this book.”
– Scott Alexander

“Anyone even remotely interested in comedy magic should own this book. It is hilarious and informative and it contains insights with some of the greatest routines of our time.”
– Paul Kozak

“Steve is one of the best in the world at developed creative magic and a sustainable career. We should study him – like scientists probing a rat. A very smart, very funny rat… Spill is at a point in life where he knows absolutely everything, and it’s all in this book.”
– Ben Seidman

“I’ve seen Steve perform his ‘Himber Free’ linking finger ring routine and was fooled by it. Having just read this chapter, I can honestly state that this routine alone is easily worth the price of the entire book to a working pro. I’m guessing some of the other routines are also in that category and look forward to studying them as well, but am already satisfied with the value of my purchase. Thanks for sharing this Steve!”
– Richard Hatch

“I have only had this book a week and I have already read it twice. It’s full of real insight, practical routines (one of which I’m working on for my show right now) and it’s just super fun to read.”
Jon Armstrong

“If Lenny Bruce were a magician, he would be Steve Spill.
Lenny has long since passed onto that great big comedy stage in the sky, but fortunately our friend Steve Spill is alive and well and has come out with a new book aimed at magicians called How To Make Love The Steve Spill Way. His first book, I Lie For Money, was aimed at a general audience and contained lots of advice on how to live a creative life. It was served along with large dollops of autobiography and spit-take funny stories about the people he met along the path while building an artistic life for himself. In this new book, Steve not only continues his general advice for would-be artists, but also gives up the details of a dozen of his most creative and hilarious tricks. It would be an understatement to say that I think everyone interested in performing magic should read this book.”
– Jack Shalom

“This is the real work from the real deal, and anyone who is serious about magic would be a fool not to take advantage of the hard-won wisdom contained between the covers of this book.”
– Donal Chayce

“Here for the first time, Spill breaks down some of the mysteries of how to actually have a career as a performing magician. From understanding in a crucial way the elements of character, scriptwriting, performing, listening to your audience, and an overall feeling about how to approach the routines that you decide to perform. The book is basically divided into two parts, the first part is theory on performing and writing comedy for magic. Steve’s rich and comic sensibilities make it an easy read. I haven’t had this much fun learning about my art since I read Paul Harris’s books in the 80’s. The Second part of the book are 12 routines from his vast performing repertoire. He goes into great detail to teach the student not just why a trick is good, but all the hard work along the way it takes to make you a better magician. In recent rave reviews from around the world from top notch magicians, there was a common thread (of needles). They all said, ‘I just finished reading this book a second time.’ I can see why. There is so much gold to mine from those 270 pages, that it almost requires an instant re-read to make sure you didn’t miss anything. Great guy, great book, great magician, and a great writer.
Buy this book immediately! A great investment for ANY magician.”
– Tom Frank

“Steve, your first book was amazing and very funny. Your new book arrived last week in Austria and it is so great. Funny, well written and full of great routines. Thank you also that you shared one of your amazing stories in our Magic Magazine Aladdin. It’s a great gift for magic pals you really like.”
– Hanno Rohmberg

“This book is amazing – seriously! You are going to be blown away on multiple levels. A MUST read! And it’s really funny – too!”
– Hal Meyers

“He’s a great writer, witty and warm with extraordinary stories. It really is a magic book, though, with routines and filled with performing tips and experience.”
– Denzil John Asche