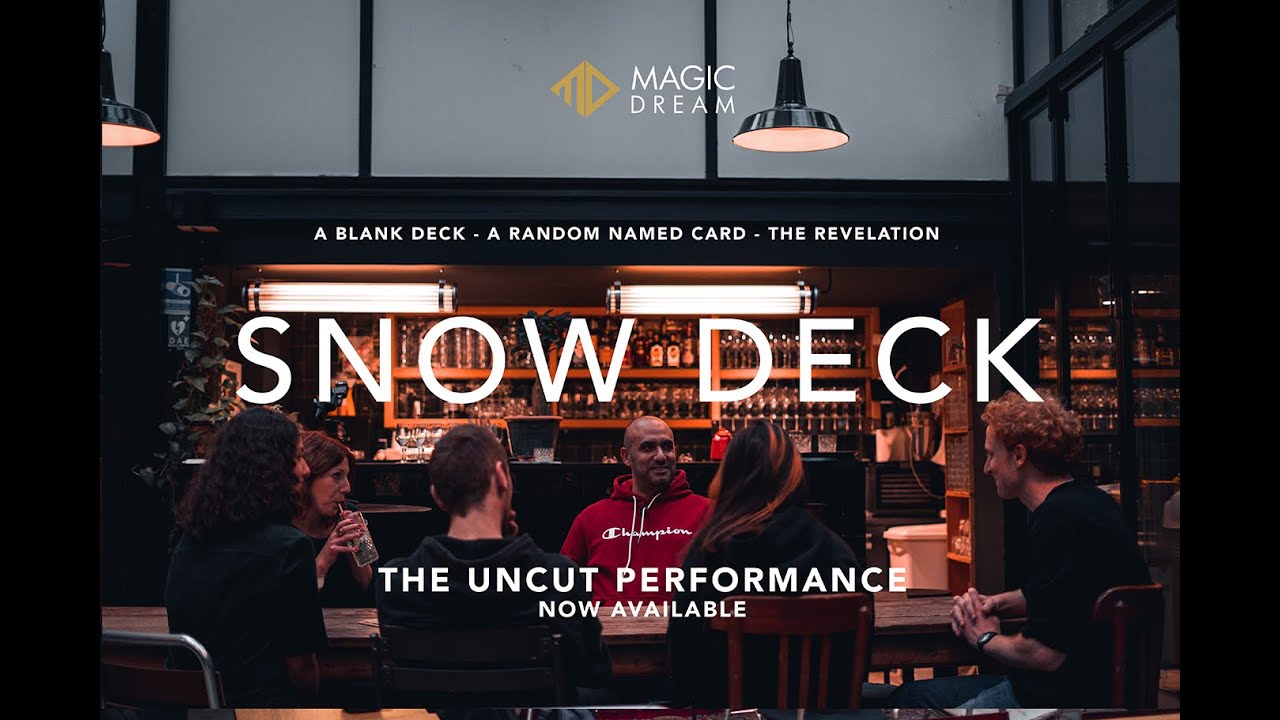 SNOW DECK offers your spectators an experience based on the imagination. A simple…

SNOW DECK offers your spectators an experience based on the imagination. A simple and direct effect, very easy to do with a powerful impact: a white deck, a freely named card, THE ultimate revelation!

A flagship and international release for the Label Magic Dream.

You present your audience with a deck that is not printed on both sides, then you pull out a white card. You ask a spectator and ask him to imagine a card printed on it and put it back in the game himself.

Instantly, without any manipulation,   you spread the deck and the back of a card has just appeared! You turn over the cards and it’s the chosen card! As pure as that!

You are not dreaming, no difficulty, no handling and above all A TOTALLY FREE CHOICE!

Yoan TANUJI , creator of many magic effects (EJO BOOKTEST, ROOM 66, etc.) and high quality card games (Bicycle PASSPORT, Fast’n’Genious, Lotricks, etc.), left nothing to chance during the preparation of the SNOW DECK. From staging to performance, every detail has been thought out and redesigned to provide your viewers with a complete routine that will leave them speechless.

On the border between the Invisible Game and the Nudist Game, SNOW DECK however uses absolutely no Roughing fluid, nor any external artifice to hide anything.

Learn SNOW DECK in minutes, like choreography with your hands. 5 ROUTINES are included for 1h30 of explanatory videos in French , with the participation of the talented and creative Sébastien CALBRY who has developed more technical routines for you.

The artist is a snow sculptor…

We are proud to announce that big names in magic such as  Bernard BILIS, Boris WILD, Craig PETTY or even Peter NARDI  have already been seduced by the smallest details of the SNOW DECK… Now, we look forward to reading your returns! 😉

What the Pros say:

“If like me you like Invisible Deck or Mental Photography type routines, Snow Deck takes it a step further as the card randomly named by someone in the audience will be the only one printed, back and front, in an all-white deck. All this with a single deck and any card. Snow Deck is a guaranteed avalanche of applause! -Boris Wild

“Yoan has created a wonderfully clever and streamlined routine with his Snow Deck. The thought behind the game is brilliant. As soon as I saw it, I loved it. In fact, I’ve already created a few routines for the Snow Deck, one of which I’m happy to say is included in the video tutorial. -Peter NARDI

Photo / video credits: Nicolas Nargeot (thanks to him!)