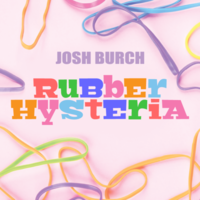 SEVEN new rubber band tricks that only use ONE rubber band, are easy to do and incredibly fooling!

“An amazing project. Definitely pick this up.” – Joe Rindfleisch

Rubber Band magic has some of the most visual effects you can perform close up. Josh Burch has created seven effects where a single rubber band does impossible things. This is the perfect place to start learning rubber band magic.

Transmutation: The magician’s fingers and thumb are held by the spectator. The rubber band impossible leaps from the fingers to the thumb.

Transmutation 2: Joe Rindfleisch’s favorite sequence in this project. A rubber band wrapped around your fingers visually jumps to your thumbs that are locked together.

Arrhythmia: An intimate take on Hanson Chien’s Touch, the rubber band jumps from your hand to a spectator’s hand at chest level.

New Band Through Thumb: In one of the most visual and impossible moments of the entire project, a rubber band wrapped twice around the thumb passes through in slow motion. You have to see it to believe it. Special thanks to Ed Ellis.

The material in this project ranges from the extraordinarily easy to more challenging. You’ll also learn how to set up and prepare for each effect in real-time. These pieces can be added to anyone’s rubber band repertoire almost immediately. This is Rubber Hysteria by Josh Burch.