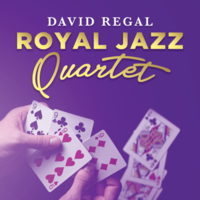 “David Regal has given a beautiful old girl a new dress. Yes,…

“David Regal has given a beautiful old girl a new dress. Yes, he’s added a cracking kicker to Jazz Aces. If you know me you know I love kickers. And as far as kickers go, this is a heck of a kick! Phew! Bravo, David.” – Paul Gordon

“David Regal has a special affection for non-pick-a-card effects such as Peter Kane’s “Jazz Aces” and I have a special affection for David’s versions of such classics. “Royal Jazz Quartet” is no exception. His thinking is clear and his motivations structured so as to not muddy the effect. The Oscar Weigl addition David shares was inspired. Using normal cards from a normal deck and David’s streamlined, crystal clear handling & instructions make this as much fun to perform as it is to watch. I immediately added this to my repertoire. Thanks again, David.” – Geoff Williams

“Royal Jazz Aves is a great version of a great routine by a great magician! David has kept the simple direct brilliant effect of Peter Kane’s original routine added great ideas of Oscar Weigle and mixed in a bit of that Regal “magic” and created a wonderful fun piece of card magic. This is one that’s as much fun to perform as it is for your audience to experience. My favorite kind of magic. You will learn and perform this one ALOT! Highly recommended!” – Tom Dobrowolski

A card trick that doesn’t need any gaffs and has a kicker they don’t see coming is a rare and beautiful thing. Royal Jazz Quartet is David Regal’s approach to Peter Kane’s classic Jazz Aces effect, and it is that rare and beautiful piece. Not only is the plot simple and easy to follow, but there is only one simple move you need to learn and David Regal teaches it so thoroughly that anyone can master it.

The magician takes four queens and four spot cards out of the deck and places them on the table. One by one the spot cards change places with the queens, impossibly assembling into one corner of the table. Just when the audience thinks the trick is over, the four spot cards transform into the four kings. No gaffs. No Special cards. Just some very simple sleight of hand.

Royal Jazz Quartet comes with a fantastic routine carefully crafted by David Regal that your audiences will love. This is the perfect effect for anyone looking to add a new card trick to their repertoire but doesn’t want just another “pick a card” effect. You’ll love this packet trick that comes out of an ordinary deck. Ready yourself to play with the Royal Jazz Quartet.