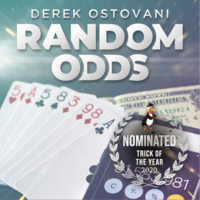 No bill switch! No setup! A BORROWED bill, borrowed phone, and borrowed…

No bill switch! No setup! A BORROWED bill, borrowed phone, and borrowed deck. A polished reputation-maker with layers upon layers of deception.

“This is one of those ‘event’ effects. Done well, nothing can follow it. Just walk off and become a local legend.” – David Regal

“Derek has combined a number of principles in order to coordinate an elaborate, but deceptive string of magical coincidences. It’s virtually an act in itself!” – John Bannon

“Borrow any deck, any bill, and any phone! Random Odds is a hard-hitting mentalism piece that you carry around in other people’s pockets!” – Cody S. Fisher

Borrowed objects. Random numbers. Impossible coincidence. Random Odds by Derek Ostovani. is a multilayered mental mystery that will blow your audience away.

Here’s what happens: A bill is borrowed from the spectator who signs it to make sure that everything is above board. The bill is left out in plain view while the spectators cell phone is borrowed. The audience tells the magician random numbers to multiply together in the phone’s calculator. Their birth year, the first three digits of their phone number, any digits that come to mind. The audience can even enter the numbers into the phone themselves. A deck of cards is shuffled in an extremely fair manner to select a generous handful of cards which are further shuffled. The spectators read out the number on the calculator as the cards are turned over, and they order of the selected cards matches the numbers multiplied by the audience. Just when your audience thinks the trick is over we remember the bill. Not only do the cards match the generated number, but they match the serial number on the bill that was borrowed at the very beginning.

Derek has worked hard to mix methods so that this is not just deceptive, but also packs a huge punch when the final climax is revealed. This isn’t just a closer, it’s a show stopper for the close up and parlor performer. This is Random Odds.