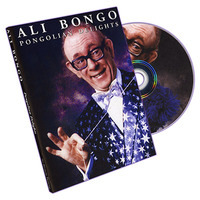 Ali Bongo (1929-2009) stood as one one magic’s most prolific inventors, creating practical and highly visual effects for British television stars like David Nixon and Paul Daniels, and he remains a beloved figure for his wonderful comedy act as the Shriek of Araby.

You’ll also be treated to Ali’s discussions of his work with Paul Daniels and David Nixon, his FISM acts, and other journeys through his life in magic.