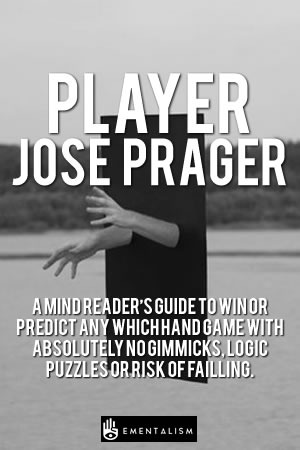 A mind reader’s guide to win or predict any which hand game with absolutely no gimmicks, logic puzzles or risk of failling.

Once you finish this secret manuscript you’ll have the power to guess or predict in which hand anyone hides an object anytime and anywhere.

COIN 2 THOUGHT Someone hides a coin in any of their hands, the mind reader asks the person to think of Marilyn Monroe if the coin is in it’s right hand or Justin Bieber if it’s in his left hand. (could be any two thoughts)
Without looking at their hands, no questions ask and no matter if he’s standing on the other side of the room, the mind reader can correctly guess the name and of course the location of the coin.

MARKED Someone hides a coin behind his back at any hand, the mind reader claims to always know where the coin is going to be and that he has never been wrong before. Immediately and without a doubt he reveals exactly where the coin is!

Just one prediction is used, it’s in the spectator hands since the beginning and it’s practically self working!

Be the first to review “Player by Jose Prager” Cancel reply