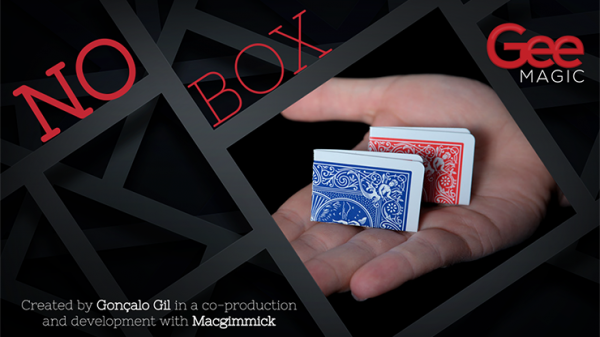 NO BOX by Gonçalo Gil and MacGimmick

No Box revolutionizes the “Card to Impossible Location” plot. No Box is Gonçalo Gil’s magnificent…

No Box revolutionizes the “Card to Impossible Location” plot. No Box is Gonçalo Gil’s magnificent co-invention along with (and developed by) MacGimmick. This special gimmick will allow you to make a signed card appear anywhere, limited only by your imagination.

The magician introduces two cards by saying that they will be important in a few moments – he can put them on the table. Then he says that there are two ways to pick cards: one of them by chance (cards are placed face down on the table), and the other can be selected (this second card is signed). The signed card is given to the spectator and magically vanishes. The magician picks up one of the cards and it matches the first card, selected by chance. The final climax is that the other card, the one in full view since the beginning, is the spectator’s signed card!

You are not limited by “Card to Impossible Location.” You can use the No Box gimmick for different effects such as: Signed Cards Transposition, Cards Across or Card Through Table.