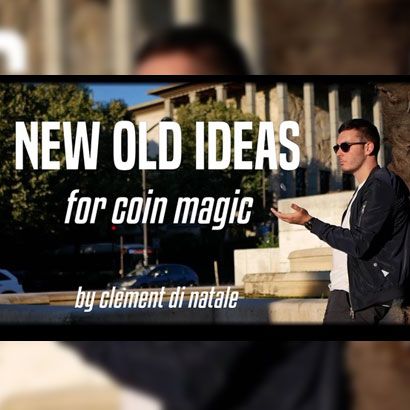 Clément Di Natale is a young magician who specializes in coin manipulation….

Clément Di Natale is a young magician who specializes in coin manipulation. In this project, he will share with you some of his 100% gimmickless ideas (without any rigged accessories) and will come back to some basics that will allow you to carry out his routines. In this project he will also share with you his vision of coin magic.

“You made me want to do coin magic again”

“Clément’s project is off the beaten track. In addition to finding very interesting routines that can be done in real conditions, you will learn techniques as original as they are visual that will open the doors of creativity to you. All outsiders go for it!!!”

“This project is beautifully done and includes some very interesting material”

“Magic is not only about visual effect, but also about feelings. Here’s how you can approach it, because we always know exactly what coin magic looks like.”

0 TO 3/ 3 TO POCKET: a production of three pieces that eventually disappear to appear in the magician’s pocket.

ONE IMAGINATION COIN: a one coin routine that engages the viewer’s imagination, moving from an imaginary coin to a real sight dollar.

SIMPLY TRANSPOSITION: a simple and visual transposition of pieces in the hands of the spectator, one of Clément’s favorite effects.

PURE TOSS VANISH: The purest vanish Clement has found, the coin vanishes into the air with no finger movement, empty hands, and doable sleeveless but also naked! (Magic Dream recommends that you keep your clothes on though)

BT VANISH: A complete coin vanish, plus a few other possible uses for the move.

The Truth By Daniel Prado