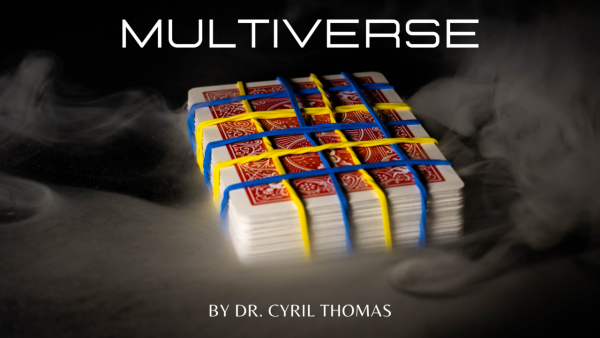 “This is easy to do, super visual, rubber band and card magic you will actually use. No extra rubber bands. No sleeves. No complicated moves. Just a single rubber band and a deck of cards! Get this!” – Josh Burch

“I like it! Dr. Cyril Thomas really thinks outside the box!” – Bacon Fire

“Among all your creations, this one is really insane!” – Dad

You like impromptu, original and ultra-visual revelations? Multiverse is for you!

Multiverse is the perfect combination of card and rubber band magic. In this new project, Dr. Cyril Thomas will teach you in depth a multitude of innovative and striking card revelations using a regular deck of card and a regular rubber band. NO GIMMICK INVOLVED and everything is fully examinable. And the best part of it? All these tricks are very easy to learn and to perform and all the setups are overtly done in front of your spectators eyes.
Multiverse is not only a set of visual miracles, it is a concept and a tool that you will use to build your own routines.

Here is what you will learn in this project :

– Unusual suspect : spectators love rising cards effect, and trust me, they will be mad of this insane version. Imagine, a random card rises from the card box and, in the blink of an eye, it is replaced by the spectator’s signed card! This effect can also be used as a double cards revelation.

– Banditious card : here is the ultimate ambitious card effect. A signed card is lost into the deck and then reappears in a millisecond face up on the top of the deck OR IN YOUR SPECTATOR’S HAND, trapped with the rubber band.

– Hellscape : the signed card is lost into the deck of card, the latter is handcuffed with a rubberband and trapped into the card box. Despite these impossible conditions, the signed card will escape and instantly appear face up on the top of the card box OR ON THE BACK OF YOUR HAND!

If you want to push your magic repertoire in the next level, enter the multiverse!

Be the first to review “Multiverse By Dr. Cyril Thomas” Cancel reply

The Book of Angels by Fraser Parker