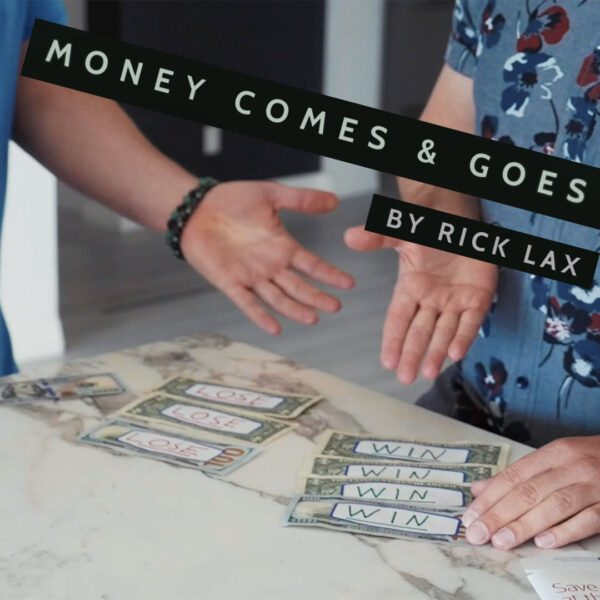 The most engaging bank-night we’ve ever seen. Using raw cash, it creates…

The most engaging bank-night we’ve ever seen. Using raw cash, it creates BRILLIANT tension, playing on psychology every step of the way.

A “bank-night” style trick is one where a magician tries to influence spectators into making choices that have lower value, typically from among 4+ options, leaving the option(s) with the highest value for the magician.

Most bank-nights use envelopes as the “choices”, and each envelope hides some amount of money. After all the choices are made, there is a “big reveal” at the end. That in itself is fine, except the process of choosing between seemingly similar envelopes is ultimately random and boring. But historically, it’s been a sacrifice magicians have made because the pay-off is usually worth it.

Rick Lax’s trick Money Comes & Goes is brilliant because it takes everything good about bank-night and ALSO turns what was a boring and random process into a FUN, TENSE and ENGAGING experience. In addition to having a big reveal at the end, EACH AND EVERY STEP ALONG THE WAY is a psychological duel between the magician and the spectator, resulting in TONS of hilarious exchanges making it more fun to BE a spectator, and also more fun to WATCH the spectator. The volunteer is fighting their urge to choose large denominations and to ignore the “influence” given by the magician.

In addition to all of that, Rick’s surprise signature ending to the trick solves the problem ALL bank-night effects share, which is the question of “how to make the spectator feel like a winner?”

2. Easy to perform, and doesn’t require any sleight-of-hand.

3. Extremely engaging and highly polished, while also being easy to adapt to your personality and venue.

4. Rick’s been performing this for years, polishing it into the masterpiece it is today. Taught in great detail, with every step shown multiple times.