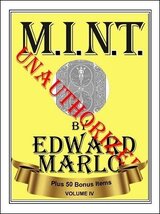 More than the thirteen major Marlo items Ed contributed to New Tops Magazine in 1981 – not to mention new sleights, finesses, and subtleties – all these items have been largely unavailable since their publication. Wesley James has added another year of material toward fulfilling Ed Marlo’s expressed wishes, keeping his material available “for the guys.”

As with Wesley’s previous release of M.I.N.T. III, these long-unavailable Marlo items could have been all Wesley compiled. Still, this volume would have been an important contribution to the literature of card magic. As tribute to Ed, Wesley wanted this volume to offer more. So, he added clarifications and corrections – both logical and grammatical – plus his own personal Notes. Some Notes are complementary, some critical, some revolutionary, all are highly informative.

Wes didn’t stop there. As Wesley has often stated, “One can’t perform card magic without a tip of the hat to Ed Marlo.” Wesley’s friend of more than 25 years, Ed Marlo, inspired a huge amount of material that Wesley developed, massaged, enhanced and adapted through his performance experience. Among Wesley’s included creations are 14 full routines inspired by the Marlo items. Wesley’s routines are fully explained, many for the first time in any published source. In total, Wesley has added more than 50 Bonus items.

If you’re as devoted to card magic as Wesley, you need to own this volume and study it closely. The combination of Marlo material plus enhancements, Wesley’s insightful Notes, and the wealth of original Wesley James routines create a volume that every serious Marlo student should own and absorb, and students of Wesley James material will want to explore in great depth.

If you already own MINT I, II, and III, now you can expand your file of Marlo In New Tops while awaiting Wesley’s completion of the remaining run of Marlo material, 82-85. At the same time, you can add to your collection of Wesley James’ creations, and benefit from his detailed descriptions and analysis. Rarely has one book offered so much to those who are serious about card magic. Some of what you’ll read is easy, and some is more technically challenging, but all the material is practical and can be added to your repertoire.

This entire collection, more than 50,000 words plus illustrations and photographs, in nearly 150 densely packed pages, preserves Marlo In New Tops. The ebook price is just $60 and, as you’ll see from the Table of Contents below, you’ll want to read this book carefully to absorb all it offers. Don’t wait to be blown away by this mix of older Marlo material and Wesley James’ insightful Notes and cutting-edge creations. It’s all here for you now.