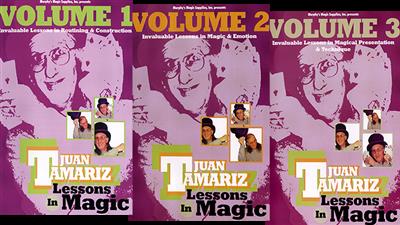 Juan Tamariz is a one-of-a-kind performer. A household name in his native…

Juan Tamariz is a one-of-a-kind performer. A household name in his native Spain , he is one of the most unique and talented performers ever to grace our art. In the tradition of Vernon and Slydini he has blazed his own enchanted trail. His books on magic are required reading for any thinking student of magic. His repertoire is vast as well as legendary; he once performed for 74 weeks in a row on television. He is in constant demand and is often mobbed on the streets of Madrid by adoring fans. He is one of those especial performers that takes the spectators on a wonderful journey – a magical journey through the heart as well as the mind.

Juan is the consummate performer. Armed with only a deck of cards he can entertain a small group or a packed auditorium for hours. He is hilariously funny, but at the same time he’ll fool you like you’ve never been fooled before. He is one of magic’s greatest thinkers, a master of misdirection and a magic philosophy, and he has never had a large body of material recorded… until now! In this video you will learn invaluable lessons in routining and construction, magical emotion, technique and presentation.

-Neither Blind Nor Stupid: A masterful and thoughtful lesson in routining and magical structure that takes a self-working effect and turns it into a masterpiece of showmanship!

-Follow The Leader: Not since Vernon has anyone received such a strong impact wit this classic of card magic. Routining and audience participation make thus a real Tamariz gem!

-Cards Across: Two merely thought of cards by two spectators magically travel from one packet to another. This long sought after effect is now revealed!

-The Caricature: One of Juan’s signature pieces. A packet effect with real personality and a surprise climax!

The Secret of Magic: Take the audience in a journey through a real visual illusion; then the illusion becomes reality!

Four of a Kind: A study in psychologically leading the audience’s emotions and the use of body language to subconsciously build suspense!

El Cochecito: As performed by Juan on The World’s Greatest magic Television Special! This is the real work on magic and emotion- taking the audience back to childhood, capturing their imagination and sense of wonder through the use of a simple toy car. This is a prime example of how to take an innocent prop and turn it into a magical showpiece!

The Cannibals: One of Juan’s signature pieces. Juan’s presentation of this classic plot is a real work of art. It elevates the storyline to an emotional, audience-pleasing, interactive adventure! Running Time Approximately 88 min

– The Centauros: An enchanting tale of myth, magic, and the sea constructed to be a beautiful, musical and magical interlude

– T.P.C.-The Tamariz Perpendicular Control: Learn Juan’s closely-guarded secret sleight. Using this ingenious utility sleight you can do many things including, undetectably controlling and palming cards. Then learn three awesome effects utilizing The Perpendicular Control: A Number, Cards to Pocket, and The Rising Card.

– Doubly Ambitious: An Ambitious Card routine with two selections! They repeatedly rise in tandem to the top of the deck; a truly unique and highly magical version of this classic effect.

– 4 Aces: Juan’s hilarious ace assembly wherein the spectator does all of the magic! A masterpiece of presentation! Running Time Approximately 81 min