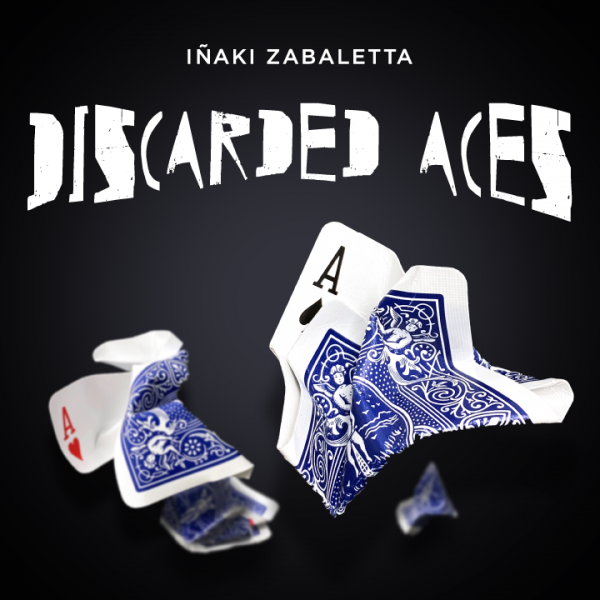 A devastating new secret. Have almost all the cards in the deck…

A devastating new secret. Have almost all the cards in the deck selected, leaving you only four cards: THE FOUR ACES. Use any deck, even borrowed

“Discarding Aces” is a great opener for any card magic routine. Iñaki Zabaletta has developed a very foolish technique that allow a very fair selection procedure, turning this in a little miracle.” – Woody Aragon

“This wonderful version of the classic “The spectator find the Aces” is one the finest and more deceitful I ever seen. Here Iñaki Zabaletta share with us a new technique with many possibilities as well as a very solid routine. Master this routine and you will create great impact in your audience as well as among magician. Master this technique and you open the door to endless possibilities.” – Manuel Llaser

“Iñaki Zabaletta fooled me badly with this unique and absolutely new and revolutionary technique.” – Michel

What you are about to see is not a force. It’s a switch. We are telling you that because the first 8 times we saw it, we were sure Iñaki Zabaletta was just forcing the aces on us. When he shared the secret with us we were floored and knew we had to share it with you. You saw him perform
this flawlessly on Penn & Teller: Fool Us! This is Iñaki Zabaletta’s Discarded Aces.

In this effect, the magician spreads the deck between their hands and asks audience participants to begin removing chunks of cards. They can take groups from the top, the bottom, the middle, wherever they want. They genuinely remove the cards they want, until you are down to just four cards. Those four cards are turned over and impossibly are the aces. Best of all you are left with the aces 100% of the time.

The great thing about discarded aces is that you could reveal any four cards. The revelation is 100% under your control and uses pure sleight of hand. There’s no equivoke, gimmicks, or forcing. Iñaki has delighted audiences with this effect all over the globe, and now you can learn the immensely satisfying secret behind Discarded Aces.