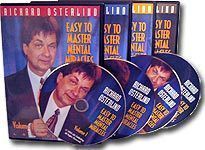 Magic Dealers might as well close! I have spent a fortune on…

Magic Dealers might as well close! I have spent a fortune on magic tricks and it amuses me how easily Richard Osterlind performs these incredible miracles with such every day objects. When you see him go through classic effects by Koran, Annemann, Corinda, Hoy, and others using precisely the methods and routines that they employed, without all of the “clever” enhancements that have come along over the years, it is really quite mind blowing.

It also becomes very clear, as I pointed out in my book review of Bruce Elliot’s Classic Secrets of Magic, that you really don’t need a lot of money to be a world class magician or mentalist. Just practice and presentation and lots of it.  Now it is fun buying “clever” magic tricks. Just don’t try to convince yourself that you need them to amaze and entertain an audience. You don’t and Richard Osterlind demonstrates this oh so clearly.

Effect: In this exciting video event, Richard Osterlind, one of the world’s top mentalists, opens the vaults and reveals the inner workings of some of the best mentalism ever created!

Not self-working, but by no means difficult to do, these classic effects already make up the repertoires of some of the finest mentalists working today.

Richard Osterlind has combed the vast literature of mentalism to find the strongest mentalism and mental magic effects ever created by past and present masters of the art and each will astound even the most sophisticated audience. Watch Richard perform them all before an astonished live audience and then go behind the scenes as he, along with host Jim Sisti, explains the diabolical methods.

Combined with the Real Secrets of what makes these effects work, this series is destined to become a classic resource for those seeking to learn the art of mentalism.

“I wish I would have had these videos by a master teacher 40 years ago when I first started in mentalism!”
— Barrie Richardson
“A great collection of some of the finest mentalism ever invented performed by one of the genuine masters of our craft!”
— Tim Conover
“Like King Midas, Richard Osterlind puts the golden touch back into these gems from the Golden Age of Magic. An updated treasure, richly done!”
— Richard Busch
“Brilliant! Finally, a first-class performer has taken the time to show that the classics of mentalism still work.”
— Banachek

VOLUME 1
SWAMI OPENER (Corinda): The performer enters holding a business card. A spectator calls out a two-digit number. That number is predicted on the business card! This is a perfect opener guaranteed to catch the attention of the audience.

MAGIC VS. MINDREADING (Annemann): The performer causes a deck of cards to spell to a mentally chosen card, then shows a remarkable coincidence with a second deck and finally shows the card was actually predicted long before the show!

A QUESTION AND THE ANSWER (Annemann): One of Theo Annemann’s greatest routines! The mentalist answers a secret question in the most direct manner possible! This is a monster effect using only a pencil and a few pieces of paper!

EXTRA-SENSORY PERCEPTION (Annemann): You can duplicate chosen designs in the fairest possible way using this classic method! Make this up in just half an hour!

A WORD IN THOUSANDS (Koran): A spectator chooses any word from any page in a huge book. Without any pumping, the mentalist reveals the chosen word on the back of a blackboard! This mind-boggling effect is fully explained along with complete directions for the construction of the apparatus!

EL NUMERO (Bergson): Using a few index cards and an envelope, the mentalist causes a spectator to choose the very number he has predicted on the back of the envelope. This is direct, simple and awesome – the fairest version of this effect yet!

SYD BERGSON CENTER READ (Bergson): This utility technique will enable you to gain any information written on an index card without any tearing or burning. Osterlind’s touches make this a masterpiece!

TELEPHONE DIRECTORY (Tong): Anyone freely chooses a page in a legitimate telephone directory. The mentalist reads his mind and writes down the telephone number the person is thinking of! This is clean, clear and direct!

SEVEN KEYS TO BALDPATE (Annemann): This is the original (and best!) version of the classic effect. Only one key out of seven opens a lock. Audience members freely choose the keys and the mentalist determines who has the right key! Both the lock and keys are legitimate!

MARKED THOUGHT (Mason): The mentalist causes a spectator to find the only matching pairs of ESP symbols while they are face down. This method allows for a completely free choice and an ordinary deck of ESP cards!

VOLUME 2
MAGIC MEDALLION (Koran): Three spectators call out a single digit number. The mentalist removes a case with a medallion inside and shows the number to be inscribed on the back! Osterlind considers this one of the strongest effects in all of mentalism!

FIVE STAR PREDICTION (Koran): This has to be the strongest mentalism card effect ever created! The mentalist shows an envelope containing one card. The spectator deals cards face up from a deck and stops whenever he wants. A duplicate of that card is found inside the envelope!

CLIP LINE (Spackman): This mind-blower is a classic piece of mentalism. A spectator tells the mentalist when to cut a news column. Although every line is different, the exact words at the spot the paper was cut is predicted! You can make this masterpiece up in minutes!

BLINDFOLD ROUTINE (Classic/Gann): Richard demonstrates the classic blindfold routine with professional touches learned from the late Ronnie Gann. This is one of the best blindfold acts and uses nothing but household articles.

FLIP FLOP FLUSH (Becker): This delightful routine by Larry Becker allows you to let a spectator choose a poker hand from a face-up deck while your hand is determined by chance. Still, you end up with a Royal Straight Flush in Spades! An ungimmicked deck is all that is necessary.

ULTIMATE MATRIX (Becker): Another routine by Larry Becker has an apparent mistake turn into a great climax. Freely chosen cards form numbers which open a locked combination lock that is trapping the spectators’ borrowed rings!

THE TRICK THAT FOOLED EINSTEIN (Koran): The mentalist predicts the amount of money a spectator removes from a bowl of coins. This is repeated a second time under even fairer conditions. You’ll marvel at the ingenuity of this!

MENTAL NUMBERS (Dalban): Vincent Dalban created this wonderful effect where the mentalist reads the minds of two spectators at the same time! The number cards can be made up from normal index or business cards in minutes.

HEADLINE PREDICTION (Koran): This effect is a killer! The mentalist tears an ordinary sheet of paper into sixteen pieces. A spectator chooses a piece and a headline. The information is found already predicted in a sealed envelope!

VOLUME 3
PAR-OPTIC VISION (Annemann): A spectator pockets three cards from a deck in his possession. Even though he is thoroughly blindfolded, the mentalist names the cards as they are withdrawn. This card masterpiece is unbelievable!

FOURTH DIMENSIONAL TELEPATHY (Annemann): This classic routine allows you to read the minds of three assistants who have written information on papers and sealed them in envelopes themselves. No special apparatus is needed for this incredibly fair routine!

THE THIRD CHOICE (Corinda): Five ESP cards are shown all different and sealed in normal envelopes. Still, the mentalist cleanly predicts which one will be chosen. The secret is simple and diabolical!

LOCKED EYE TEST (Classic): The mentalist locks the eyes of a spectator! Osterlind shows how to make this foolproof.

LOCKED HANDS TEST (Classic): A continuation of the above in which the mentalist causes all the spectators’ hands to become locked! Again, this is a foolproof method!

THE ABNORMAL LIFT (Classic): If you’ve never seen this before, you’re in for a treat! Four spectators lift a fifth adult with nothing but their fingertips! One of the highlights of the series!

TERVIL (Meyers): In this bold routine, the mentalist makes a prediction and lays it aside. A spectator writes down a number, a color and a name. The performer’s slip is read and he is exactly right! Osterlind shows you how to make this routine work.

IMPROMPTU BOOK TEST (Corinda): This delightfully simple routine will enable you to perform a book test that is second to none. The book is ungimmicked and borrowed and the gimmick is something you have in your pocket right now!

SLATE WRITING (Classic): A spectator thinks of the name of a departed individual. The mentalist shows both sides of two ungimmicked slates and numbers each side. A piece of chalk vanishes and the name appears on the slates! This routine was one of the highlights of the video shoot!

LIVING AND DEAD (Corinda): The classic routine is demonstrated using the simplest of methods. Not only is this a wonderful routine, but it will enable you to learn a valuable tool in mentalism!

ENCORE CARD STABBING (Koran): This was Al Koran’s encore closer! The mate of a pocketed playing card is found in a daring way with a knife! The routine is as simple as they come.

VOLUME 4
ACIDUS PLUS (Mann): This is one of Al Mann’s finest creations. Nothing but an index card is used to read the spectator’s mind three times! You will marvel at the incredible, fair-looking method.

MAGAZINE TEST (Annemann): You will be able to read the minds of your audience in a straightforward way with the simple preparation in this test. You can name pictures, words and even whole lines with this method!

PATEO FORCE (Classic): The mentalist makes a prediction. Spectators place objects on the table and all but one are eliminated. The prediction is shown and it matches! This wonderful principle can be used in many different ways.

PSEUDO PSYCHOMETRY (Annemann): Members of the audience seal personal objects in envelopes. The mentalist gives a reading for each spectator and returns each object to the proper person. Many consider this to be the greatest effect in mentalism! Osterlind demonstrates the original method with a wonderful update.

PREDICT-TAC-TOE (Gardner/Thompson/Osterlind): This wonderful routine allows the mentalist to predict the outcome of a game of tic-tac-toe. Osterlind’s ending will delight you!

ORIGINAL CENTER TEAR (Corinda): Osterlind demonstrates how the original center tear method is still a very viable tool. A very clever idea will enable you to do this anywhere!

VIEWED ESP PREDICTION (Osterlind): Osterlind’s own ESP card effect where the spectators can see the assistant matching the mentalist’s prediction as it is being fulfilled! Nothing is required but a normal deck of ESP cards.

SPOON BENDING (Harris): A classic method of bending a spoon that can be performed while your hands are being burned! You will use this all the time.

PHANTOM ARTIST (Annemann): One of Theo Annemann’s forgotten miracles! A spectator freely chooses the name of a president. The mentalist cuts out a perfect silhouette of the chosen president!

Be the first to review “Easy to Master Mental Miracles by Richard Osterlind Vols. (1-4)” Cancel reply