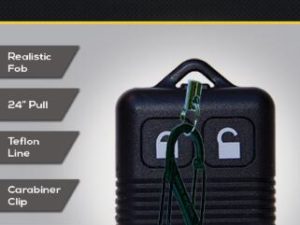 A ring VANISHES then appears in your back pocket attached you your keyring.

Borrow a ring , and in the cleanest way you vanish it at your fingertips – both hands are clearly empty. Reach into your back pocket and produce your keys – and their ring is on your keyring!

Introducing the world’s most impossible and invisible ring flight. Departure is a pull-style flight built into a key fob that fits on your keychain.

Departure was first released in 2008 and Chris has performed it thousands of times. He took his time redesigning this new and improved version.

He’s added all new features AND made it as tough as a battleship. Plus he kept the price the same!

Here’s a comprehensive list of the new features and improvements:

Smaller Housing
Takes up even less space on your keychain. Plus I added some handsome lock icons to give it an even more realistic look.

Longer Cable
Increased from 18″ to 24″. This allows you to display the ring even further away from you body before the vanish. Also good if you like to perform wearing a jacket.

Teflon Cable
Designed for years of service – WILL NOT SNAP OR BREAK.

Extra Bushing
There’s an extra bushing on the housing where the cable emerges to cut down even more on friction. Friction is the enemy of a good flight.

Carabiner Clip
Makes it easy to get any size ring on the clip without even looking. Plus it just looks cool – like you just finished scaling Everest!

Wherever you go, Departure goes. Built to withstand heavy use, Departure is a ring flight that can withstand the CLOSEST scrutiny. It’s whisper silent and mega powerful.

Included in the online instructions, Derek Roberts teaches his Shirt Vanish – a way to cleverly vanish any ring right under spectators’ noses.

You’ll also learn a stunning ring and key transposition, which climaxes with their ring appearing your keychain.

Be the first to review “Departure by Chris Smith” Cancel reply