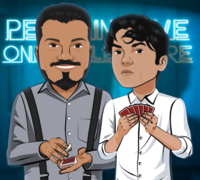 https://m.youtube.com/watch?v=lYyKm2YeE34 Finding another father and son magic act as great these two,…

Finding another father and son magic act as great these two, is almost impossible. They set the bar for future family acts, and for now, they wear the crown!”
-Marcus Eddie

“David and Jacob have the unique ability to entertain me while also fooling me. Jacob makes me laugh harder than almost anyone in magic and that old guy that drives him to the gigs is also pretty cool. The Rangel’s unique perspective is fresh and fooling.” -Brent Braun

“I’ve literally watched David and Jake workshop their characters and on stage chemistry over the past 7 years into something that everyone can learn from.” -Daniel Garcia

“Dave and Jake embark on a show so insightful, so honest, so legitimate that it will fix all of society’s problems and lead the way to a new plane of existence.” -Alex Rangel

Awarding winning Father & Son Comedy Magic Team, Dave “Pops” and Jake Rangel “Kid” both known for their seemingly effortless charisma and self-assurance, have taken their act all across the globe, The Rangels have performed their magic while spinning intriguing tales that are legendary. Endearing themselves with audiences everywhere they go. Dave, was a Winner of TAOM Close-Up award in 2014. Jake was awarded Bob Blau Young Magician’s Award for 2018 from the International Brotherhood of Magicians. And both received Houston Community Service Award from the Houston Police Department in 2020.

David also had a radio show voted best in Houston in 2011 by the Houston Press
and is a children’s author.

Jacob has 20 different welding certifications. 3 in HVAC, one in electrical and one in accounting.

Strange unknown fact, once was the opening act for “Alvin and The Chipmunks.”