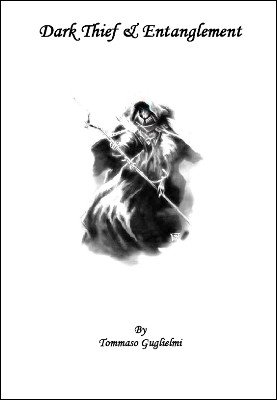 Dark Thief Two spectators think of a number between 1 and 10….

Before to perform the ACAAN effect, we have:

Now, the magician asks the second spectator to do the same and after the cut, he will remember another secret random number: ex. 35

At this point the deck is shuffled again by the spectators.

Now, the magician explains that he wants to perform an ACAAN effect and in order to do this, instructs the first spectator or the second one to select a card using his thought of number (Example: The second spectator takes the deck and counts from the bottom at his thought of number 35 and then he will remember the card in that position: 5H. To avoid some old trick, the magician doesn’t see the cards and the order of the deck doesn’t change). The magician asks the spectator to cut and complete the cut and then to perform a triple cut and, after another shuffle, the deck is placed onto the table.

Under these conditions, the magician asks the spectators to reveal card and number: 5H and 20 … and to verify if 5H is at named number inside the deck. One of the two spectators counts 20 cards and 5H will be there.

After this effect the magician, without touching the deck, explains that he wants to try a classic Open Prediction effect, so he names out loud a card: 3 of Clubs and this card, after the dealing process, will be the only card face-down.

Just a note: The Open Prediction effect meets all the JS’s conditions (51 Faces North) aside that the magician touches the deck (ACAAN part), so if you ignore it you have a perfect Open Prediction.

Out of the blue, someone asks the magician to perform some magic. So, he asks for a deck of cards and claims that he wants to perform something special without ever touching the deck. He asks a spectator to shuffle the deck and to select one card and to lose it inside the deck.

At this point, he turns his back and says that he will guess the spectator’s card using his voice and to do this, the spectator has to name one by one the cards out loud.

After the spectator finishes, the magician names his card correctly. He says that the author of this effect is Alan Turing and he discovered it deciphering a message sent by a German spy during the Second World War. Alan Turing was an English cryptanalyst and he was famous for breaking the German Enigma machine. No one knows that he also created a code: an Enigma Code and that he used it in a card trick many times in order to fool everyone.

Today I want to show you this effect. The magician removes a piece of paper from his wallet and on it there is a chart. The chart shows a relationship between cards and numbers and he explains that this is the Enigma Code and he will use it later.

Now, he explains that Turing uses this effect in order to demonstrate how easy it is to break any code. Apparently, the spectator shuffled the deck, he freely selected a card: 5D a random number: 41 and the magician never touched the deck. Now, he asks him: “Wouldn’t it be amazing if the 5D is inside the deck in the 41st position?”

He agrees. So, he asks the spectator to count face up 41 cards and the 41st card will be the 5D. After the effect, he says that the secret behind this effect is what was used to break the Enigma machine.

The magician shows 2 decks of playing cards: a normal deck and another one with the numbers between 1 and 52 imprinted on the back of each card. He hands the normal deck to the spectator giving him the following instructions:

Now, the magician shows the second deck and explains that he will use this deck in order to select a random card and a random number. So, he asks a spectator to name any number between 1 and 52: 13 for example is named and then the magician looks for the card with the number 13 on the its back and shows that this card is the Queen of Spades. Now, he asks another spectator to name any card: Jack of Clubs and looks for it inside the deck. As he finds it, he shows the number on its back: 31.

After this step, we have: Queen of Spades and 31.

Now, without the magician touching anything, a spectator counts, from the first deck which was ribbon spread on the table, 31 cards and the 31st card is exactly the Queen of Spades. He turns it face down and this card is also the card signed before the start of the effect.

Beyond Reloaded by Tommaso Guglielmi