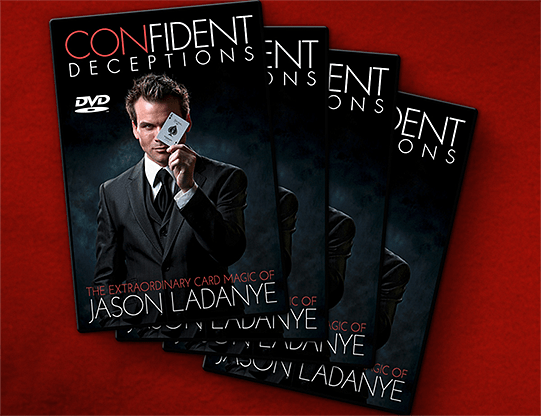 Containing a mixture of material, including some effects that require minimal skill as well as others for the advanced worker, in total sixteen effects are covered. Ranging from powerful and practical magic effects to entertaining gambling routines – Confident Deceptions is a powerhouse of effects covered in explicit detail.

The four-volume DVD set contains six hours of material, with a total of sixteen effects, with bonus materials (including two performance-only effects), and three utility moves.

The Quick Change Artist
Here’s a great opener with lots of visual magic including multiple color changes followed by the four aces turning into the four jacks.

Precision Aces
Four aces and three selections are lost in different places in the deck. After a few shuffles, the aces trap all the selections.

The Big Blind
Here’s an amazing Texas Hold ‘Em demonstration. The performer divines the flop, turn, and river cards from a shuffled deck-and wins the hand with a powerful hand.

Bringing Down the House
It’s the strongest blackjack demonstration you’ll ever see. The performer deals four suited naturals from a deck shuffled by the audience.

Ladanye’s Ambitious Card
Every performer seems to have their own version of this effect. Ladanye’s version has a closer that brings the house down. One of the cleanest and strongest versions you’ll ever perform.

Arcane Control
The performer gives a stunning demonstration of how he can control cards during a shuffle.

The Player
This is a version of the torn and restored transposition made famous by David Williamson and David Blaine. Jason reworked the effect and gave it a killer presentation. This one is a real crowd pleaser.

Forging Ahead
Here’s one of the strongest signature transfers you’ll ever do. In Jason’s version of this classic plot, you transfer the initials from the face of one card to the face of another card. This effect will eviscerate your audience.

Lucky 50
A fifty-dollar bet is made that the performer can find a selection from a deck mixed by a spectator. The performer wins the bet and finds the card where no one suspects.

The Set-Up
The performer offers to teach a card trick to the audience. After the explanation they are left with an even greater mystery.

The Ultimate Exchange
The magician makes a card change places with another card that’s face up in the spectator’s hand!

Through and Through
The performer pushes a single playing card through the table. The effect is repeated. On his second attempt, the entire deck travels though the table – except for one card – the signed selection.

Thought Transference
The performer causes a card the spectator is thinking of to disappear from a packet of cards. The thought-of card reappears under the spectator’s hand.

The Big Stack
This is a gambling demo that will bring the house down. The performer shuffles the deck twice and deals himself the four queens. His opponent has the four kings. When the performer shows his hand again it’s turned into the four aces.

Best for Last
The performer deals himself every poker hand from lowest to highest. This is a closer that you’ll add to your repertoire right away!

If I were to describe Jason’s magic from a magician’s perspective, numerous terms would spring to mind: thoroughly thought-out, finely crafted, and ingeniously instructed.Darwin Ortiz

Jason’s ideas with a deck of cards never cease to amaze me! His ability to fool laymen AND magicians only elevates his talents.Joshua Jay

Jason Ladanye is a new and exciting international cardician whose passion for the subject is second only to the uninhibited skill he has worked hard to achieve. He brings a refreshing perspective to the subject – his material and virtuosity sparkles with raw power and energy.Michael Vincent

A superb technician, the very definition of a professional performer.Andrew Wimhurst

Jason Ladanye is a master of artifice, ruse, and subterfuge at the card table.Jack Carpenter

Increase by Joseph B